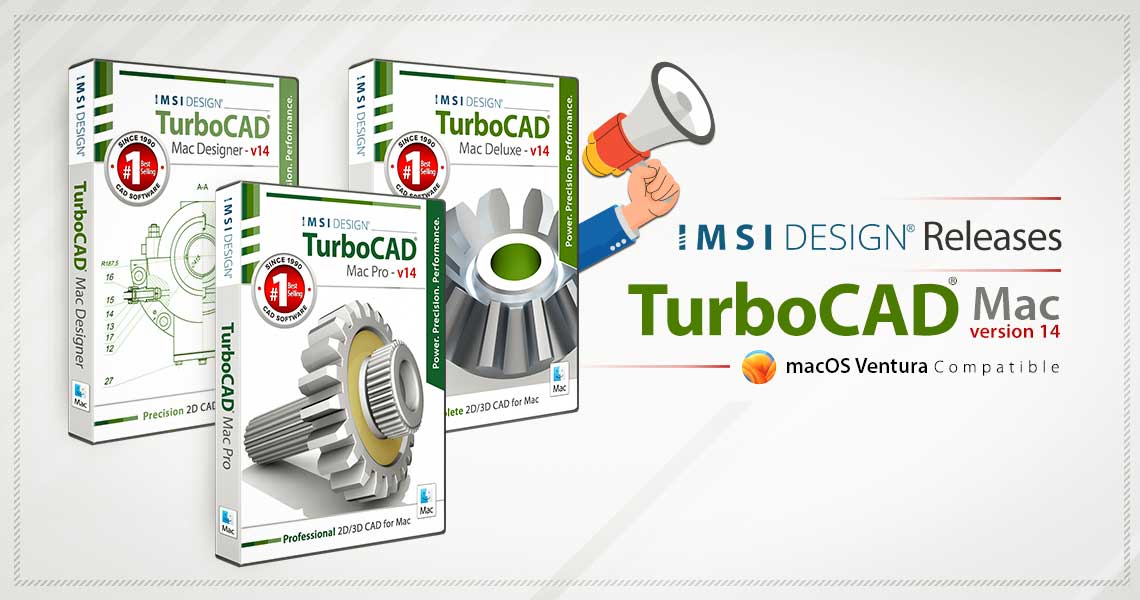 Easy to Use Precision Design Tools

The release of TurboCAD Mac 14 continues a long commitment to the Macintosh platform, providing updates to support Apple’s most recent macOS Ventura release and numerous feature enhancements. Features include a major update to the photorealistic rendering tools as well as enhancements to 3D modeling, drafting, data sharing, and useability. “The release of TurboCAD Mac 14 continues our commitment to bringing precise 2D/3D content creation tools with the ease of use afforded by the Mac user interface,” stated Tim Olson, Vice President of IMSI Design. Some of the new features introduced in v14 include:

Introducing a collection of tools unique to mechanical minded designers that includes:

New Materials – Physically based shaders for matte, glossy, mirror,metal, and glass provide more accurate models of materials interactive with light. Support for 14 different predefined metal types as well as 12 glass and gemstones ready to be applied along with customizing parameters

IMSI Design is a global leader in mechanical and architectural CAD (Computer-Aided Design) and a pioneer in mobile solutions for the AEC (Architectural, Engineering, and Construction) industry. With over 16 million products distributed since 1988, IMSI Design products include the award-winning TurboCAD®, DesignCAD™, TurboFloorPlan®, TurboViewer®, TurboReview®, and TurboSite® families of precision design applications for desktop and mobile. Please visit www.TurboCAD.com or www.IMSIDesign.com for more information. 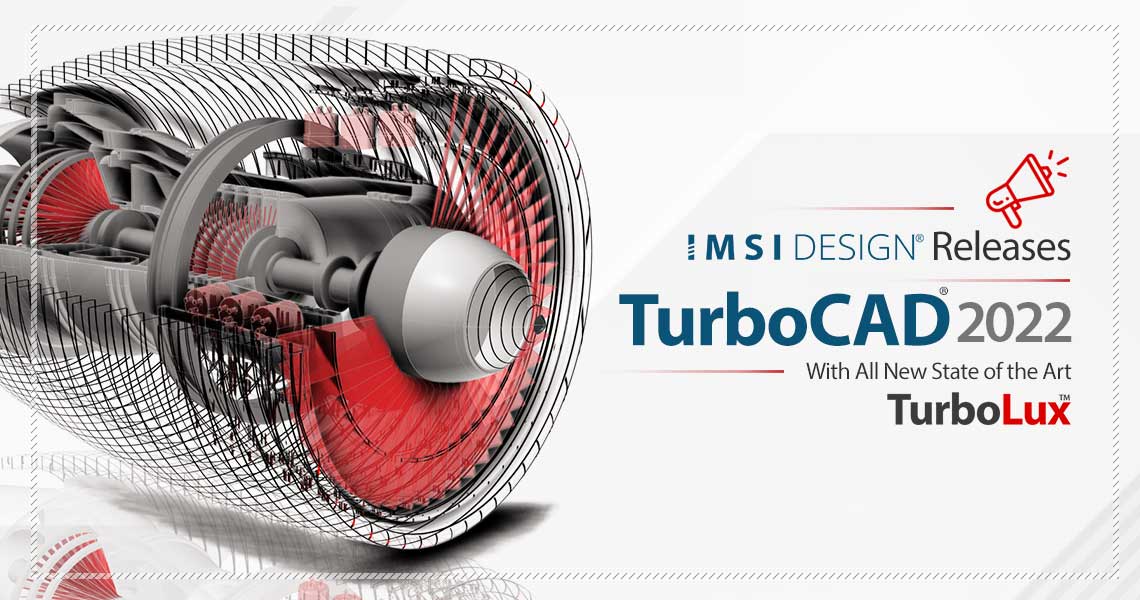 The TurboCAD 2022 release is highlighted by the inclusion of a new Physical-Based Rendering (PBR) engine, TurboLux™, included in all of the 2D/3D versions of the product line.Includes over twenty new and improved features.“The release of TurboCAD 2022 has a strong focus on Visualization, 3D Modeling and Architectural enhancements, as well as integration with our new in-app Content Server that contains 100,000’s of parts to speed-up design,” stated Bob Mayer, President of IMSI Design.“

“We are excited to announce the release of TurboLux, a first of its kind Physical-Based Rendering engine now available in TurboCAD Deluxe, Professional and Platinum versions. The TurboLux rendering engine addition has taken TurboCAD’s visualization capabilities to a whole new level of photo realism.Both CPU and GPU rendering are incredibly fast, there’s hundreds of additional materials, and when coupled with the other 2D drawing, 3D modeling and interoperability enhancements, we know all of TurboCAD users will find 2022 a great new release,” added Mayer.

Key New and Improved features include:

New Search option in Drawing and Program Setup – when launching TurboCAD, the new start-up screen displays recently created files and the ability to open/create new files via its Create tab.In addition, from the Start-up you can learn about TurboCAD basics, including the viewing of new feature videos, via the Learn tab, and get access to the latest information about TurboCAD, via the News tab.

Selector, new Keep Size Option – A new option “Keep size” has been added to the 2D and 3D Selector’s Local Menu. This option is intended to scale the distances between the selected objects, without scaling the objects themselves that is not changing their size.

New Content Server and Palette – The TurboCAD Content Server (TCS) is an online repository of CAD content.Currently, TCS contains more than 700,000 mechanical parametric parts which can easily be dragged and dropped into your drawing.These symbols fully support international standards such as DIN, KR, ISO, ANSI, and ASME.

Surface on Face –  A new local menu option “Offset” has been added to the Surface on Face tool. This defines the offset of the surface from the object. When the surface is being created, user has this option to create it with a positive or negative offset from the source object.

Radial Grid – A new AEC Grid “Radial Grid” has been added to the Architecture menu. This Radial grid is a new tool that makes it easy to align other radial architectural objects in the drawing, such as curved walls and columns.

Slab Edge Styles support – A new category Slab Edge Styles has been added to the Style Manager. Now user can edit the slab edge styles via a new edit mode. Using edge styles, you can specify dimensions, such as the overhang length, and the orientation and angle of the edges. User can also specify a fascia and soffit for the edge style. With this new feature, it is now possible to edit slab edge style by activating “Edge Style” option in the edit mode.

AEC Grid improvement – A new property ‘’Keep label value” has been added to the AEC Grids. The new option adds the ability to save the axis name without changing it, regardless of the order of the axes in the grid. With this option enabled, the user can automatically move the axis to any position without having to have to re-name it.

Wall/Window/Door tools improvement – A new local menu option “Anchor to AEC Grid” has been added to the walls, windows, and doors. When this option is enabled, the ends of the architectural object anchor to the AEC grid. The end position of the object changes in accordance with edits made to the AEC grid.

Roof Improvement – A new local menu option “Overhang” has been added to the Roof tools. User can now edit overhangs for each side of the roof.

TurboLux™ Physical-Based Render – TurboLux is a state-of-the-art rendering technology which exploits Physically Based Rendering (PBR) techniques.PBR models light and materials based on the laws of physics, accurately simulating the flow of light, resulting in eye-popping images of photographic quality.TurboLux includes over 800 fully-editable materials, support of both CPU and GPU-based rendering, and advanced rendering features such as tone mapping, HDRI, caustics and a Denoiser.

Visualize – The Visualize renderer and drawing engine has further enhanced, with support of a Dynamic Cut Plane tool, extended Camera parameters, including Edge and Face mode/color related settings, and the addition of Visual Styles to Named Views

For a more complete listing and descriptions of all of the new and improved features in TurboCAD 2022, please visit www.TurboCAD.com

IMSI Design is a global leader in mechanical and architectural CAD (Computer-Aided Design) and a pioneer in mobile solutions for the AEC (Architectural, Engineering, and Construction) industry. With over 16 million products distributed since 1988, IMSI Design products include the award-winning TurboCAD®, DesignCAD™, TurboFloorPlan®, TurboViewer®, TurboReview®, and TurboSite® families of precision design applications for desktop and mobile. Please visit www.TurboCAD.com www.IMSIDesign.com for more information. 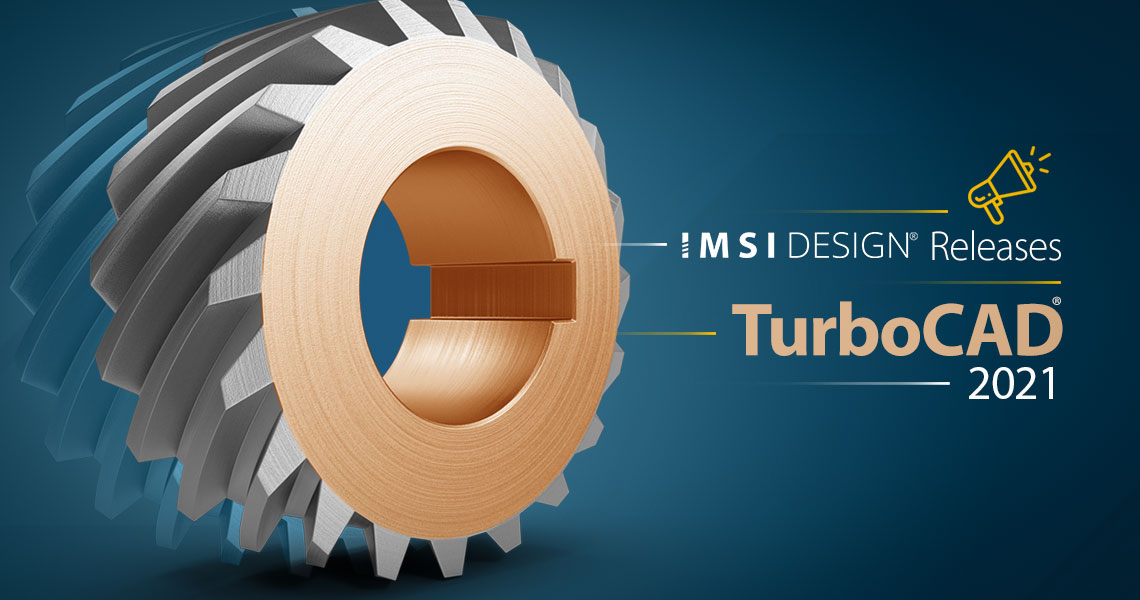 TurboCAD 2021 includes over thirty new and improved features. “The release of TurboCAD 2021 marks the fourth decade of sales of TurboCAD for Windows,” stated Bob Mayer, President of IMSI Design. “We are proud of this milestone and grateful to the millions of users worldwide who have continued to make TurboCAD one of the leading-selling CAD brands in the world.” 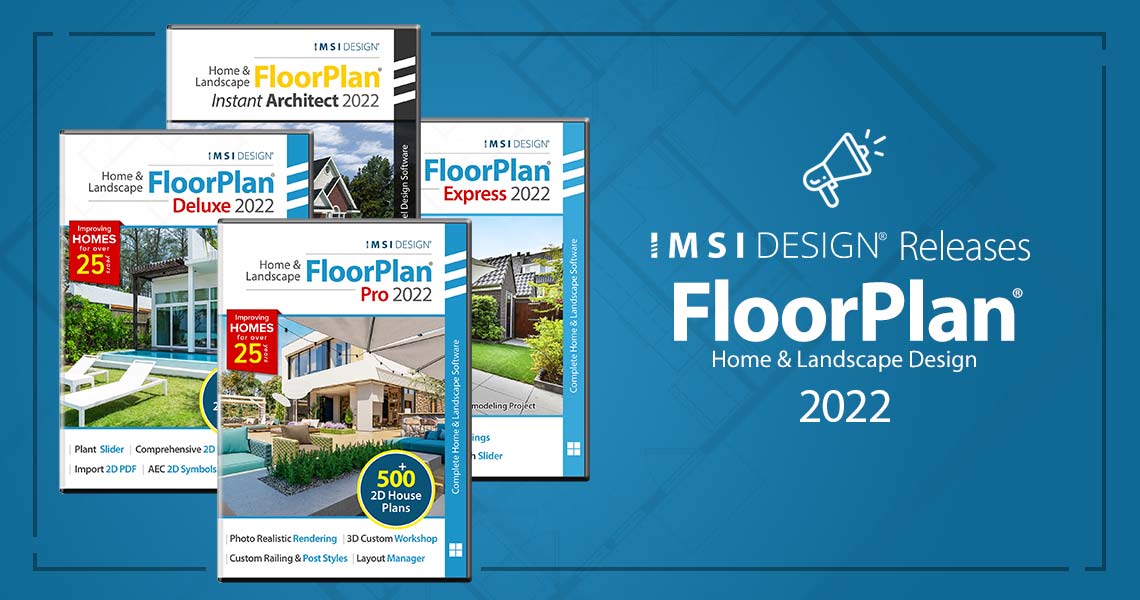 NOVATO, Calif., December 01, 2022 – IMSI® Design, a leading software developer of Home Design and CAD titles for over 30 years, today announced the release of new Windows versions for all of its award-winning FloorPlan® Home & Landscape Design software titles. These products are available now through the IMSIDesign.com and TurboCAD.com websites.

“Our return to the original FloorPlan brand name underscores our commitment to providing comprehensive and value-priced home and landscape design software for consumers and professionals alike. The new Custom Workshop Pro toolset adds true 2D and 3D CAD design capabilities and greatly expands file interoperability to CAD and graphics file formats. This powerful set of tools lets you create any type of object – interior and exterior design fixtures, furniture, or household objects, and then save them to your library for reuse. This is a real game-changer!” said Bob Mayer, President of IMSI Design. “In addition, the new 360o Online Viewer is a great way for users to collaborate on their designs,” added Mayer.

Layout Manager 2D/3D – Layout mode allows you to build a presentation of your design into construction documents. Create a custom sheet set. Easily add or reorder pages. Title block page allows you to create a title block displaying borders, company and customer information, etc. The elements on the title block sheet will automatically be displayed on all sheets of your layout.

Photo Rendering (Luxcore) - The new photo rendering engine is a physically based rendering (PBR) solution exploiting state-of-the-art algorithms that simulate the flow of light according to physical equations. Also introduced are a new set of physically based materials with parameters based on the optical properties of metals, glass, matte, glossy, and transparent surfaces.

And much, much more…

The FloorPlan 2022 for the PC product line is available now from both www.IMSIDesign.com and www.TurboCAD.com

IMSI Design is a global leader in home design and in mechanical and architectural CAD (Computer-Aided Design) desktop software for the PC and Mac, and a pioneer in mobile app solutions for the AEC (Architectural, Engineering, and Construction) industry. With over 16 million products distributed since 1988, IMSI Design products include the award-winning TurboCAD®, DesignCAD™, TurboFloorPlan®, TurboViewer®, TurboReview®, and TurboSite® families of precision design applications for desktop and mobile. Please visit www.TurboCAD.com for more information 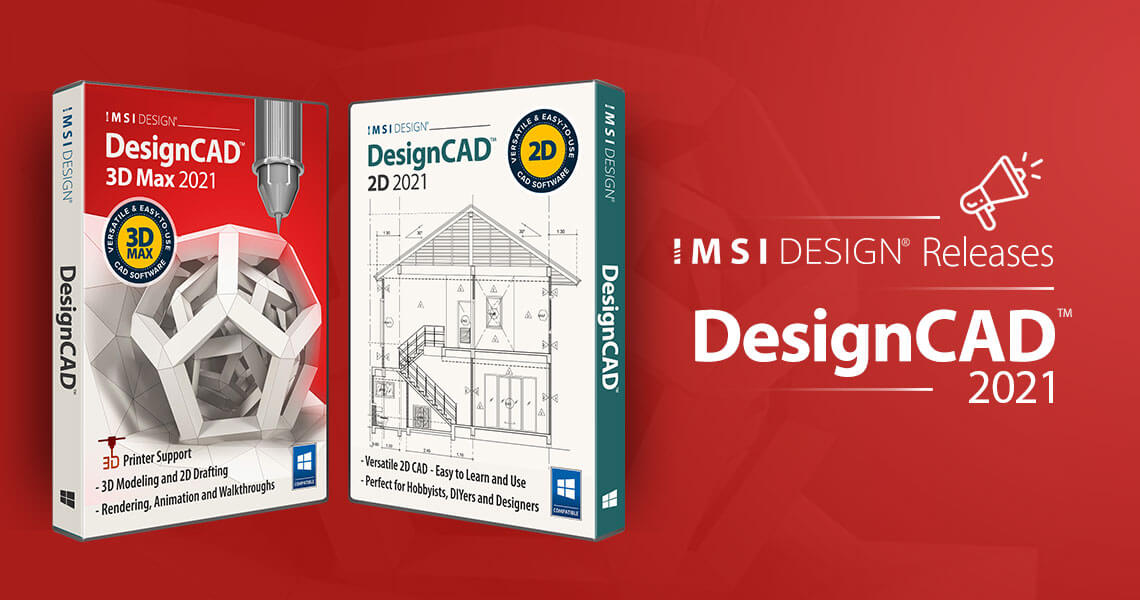 “We've put a lot of emphasis on usability, performance  and overall modernization of DesignCAD  with the 2021 release,” stated Bob Mayer, President of IMSI Design. “Both our existing customers, as well as prospective new users will appreciate these enhancements that continue to make DesignCAD the easiest to learn CAD title” added Mayer.

IMSI Design is a pioneer in mobile solutions for the AEC (Architectural, Engineering, and Construction) industry and the global leader in retail CAD (Computer-Aided Design). With over 16 million products distributed since 1988, IMSI Design products include the award-winning TurboCAD®, DesignCAD™,  TurboFloorPlan™, and TurboSite® families of precision design applications for mobile and desktop. 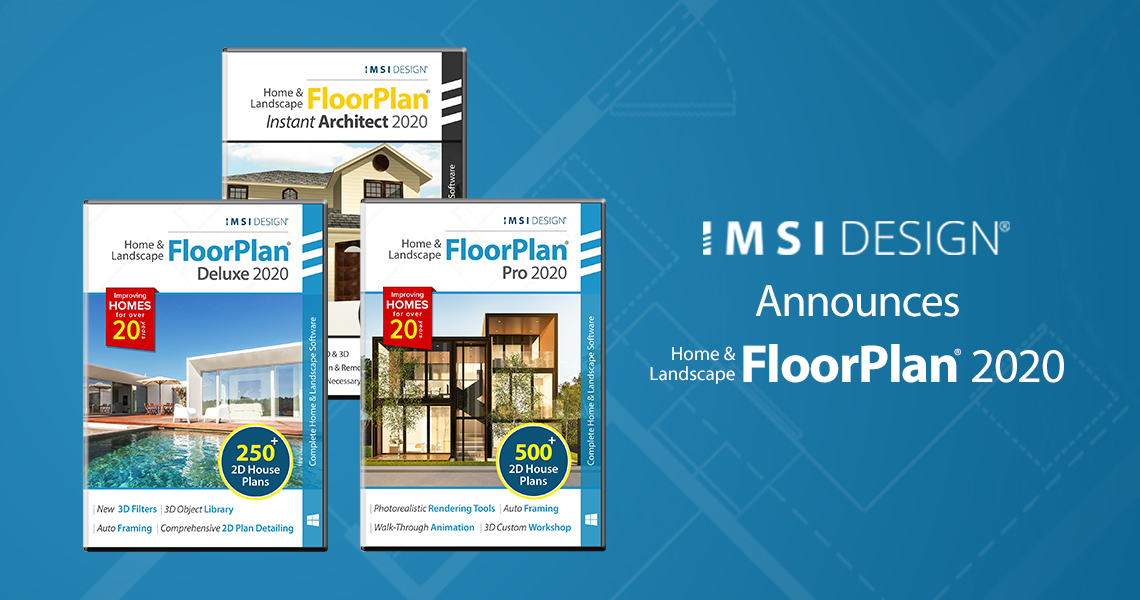 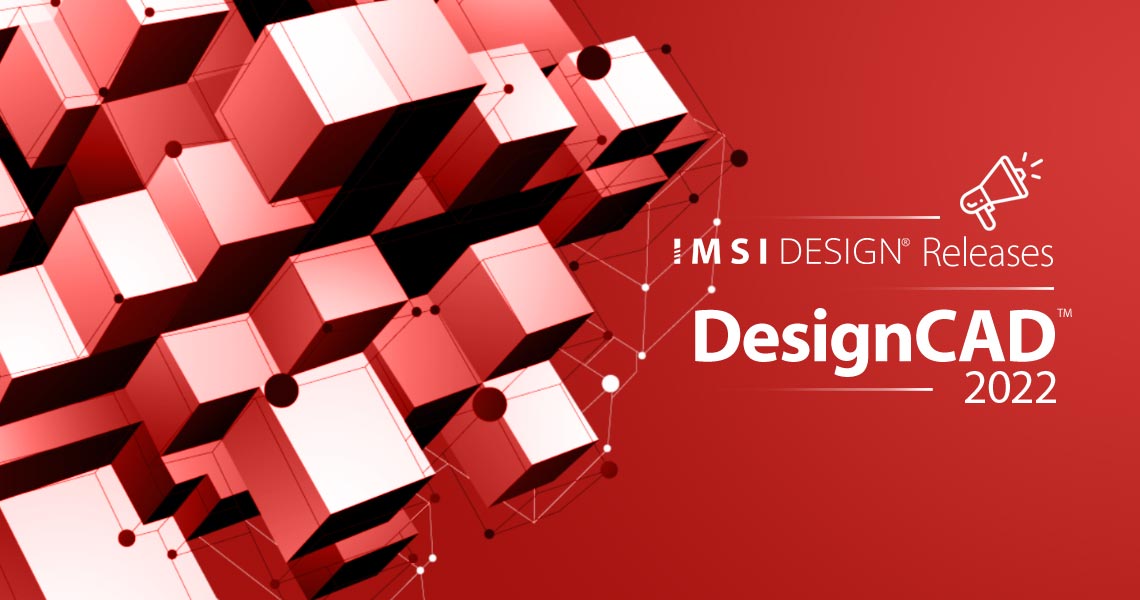 Novato, CA – October 28, 2022 – IMSI Design, the developer of TurboCAD, the #1 selling CAD program in retail, announced today the release of its latest upgrade to the DesignCAD family of products.  “The development team at IMSI Design has put emphasis on performance, usability and many improved features”, stated Tim Olson, Vice President.

Pre-defined Views – 9 different pre-defined views have been added to the DesignCAD 2022 version, that can be applied on the drawing window.  The 9 views are: Front View, Top View, Bottom View, Right View, Left View, Perspective View, Isometric View, and Trimetric View.  Option to select pre-defined views is added in the View tab inside Classic and Ribbon Menu.

Block Editor Mode in Ribbon – Just like the classic menu, you can use Ribbon menu to save edits while in the block editor mode.  Separate group for Block Editor/Insert Manager is created in the File Tab of Ribbon which contains options to save and exit the Block Editor mode once the block is edited.

Reduced Loading Time  in 3D Mode – Loading time when importing very large files in 3D is now reduced.  From 20 seconds to approx. 6 seconds in some cases. 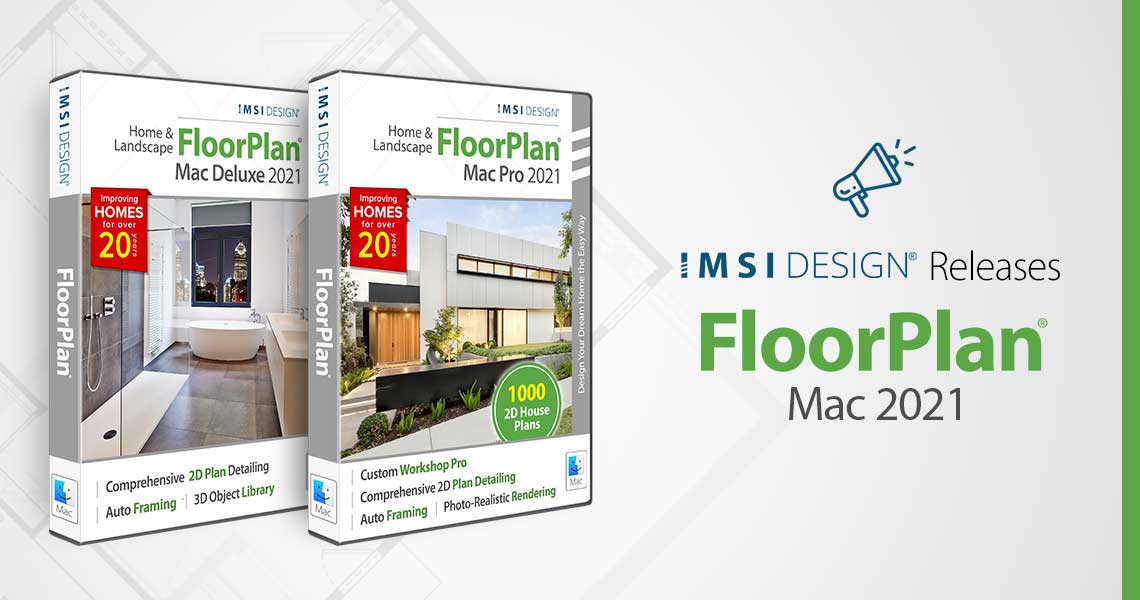 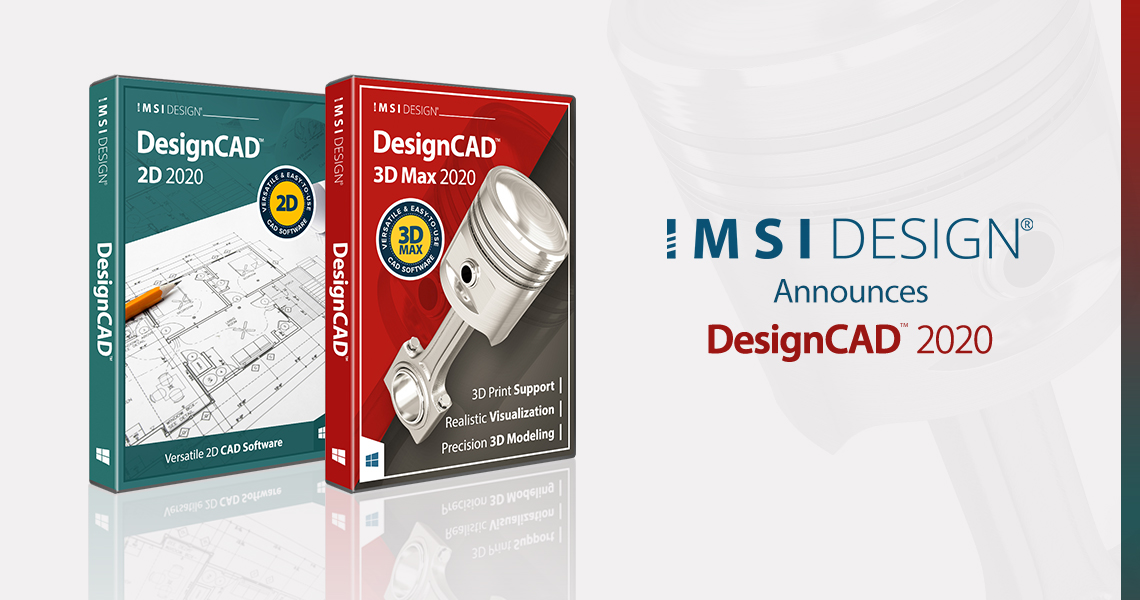 NOVATO, Calif., May 11, 2020 – IMSI® Design, the developer of TurboCAD®, #1 best-selling CAD in retail, today announced its latest upgrade to its DesignCAD™ family of products.. 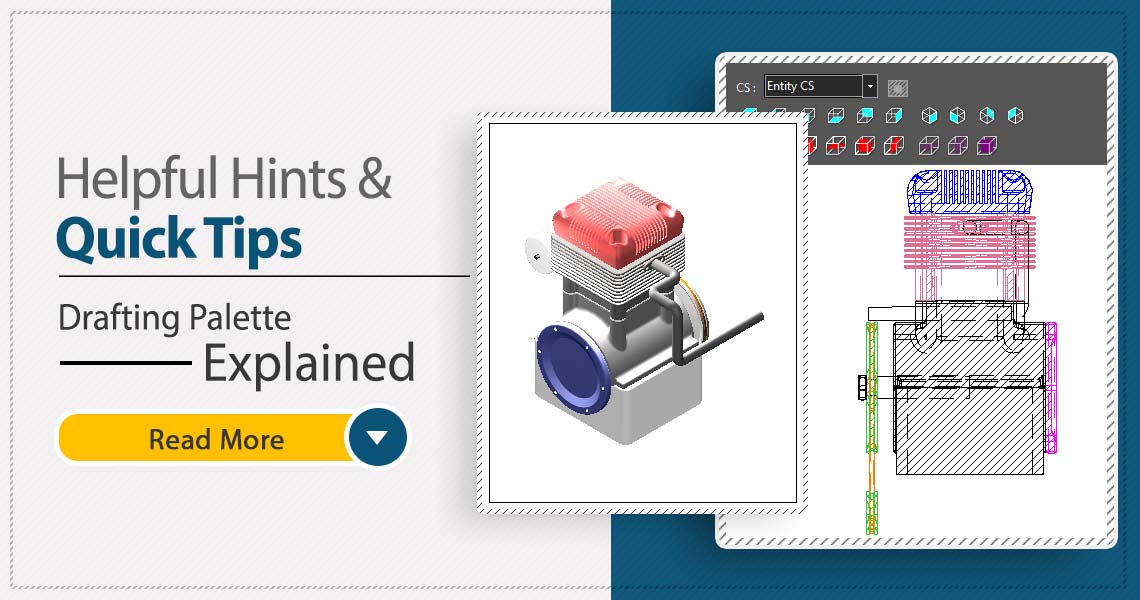